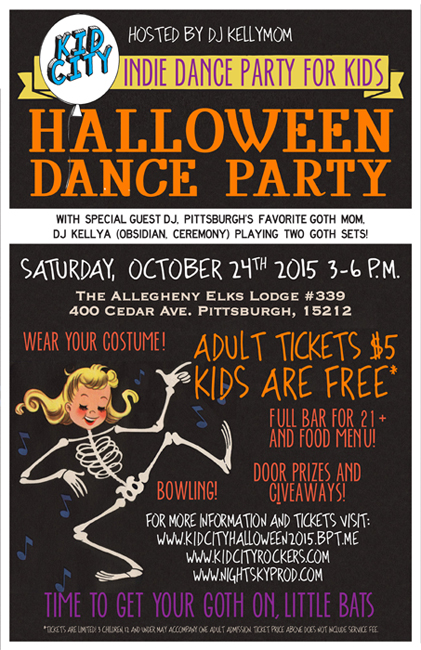 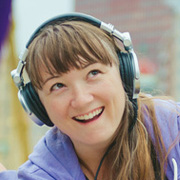 DJ KellyMom is Kelly Day, a community leader from Brighton Heights who has spent the past 20+ years building up a massive collection of vinyl. 4 years ago, she started building a new collection: children of her own (two boys, Thurston and Winslow and her girl, Marigold). KID CITY was an idea that Kelly had when she was pregnant with her first child. Her dream is to share her love of music with other families in a place where both the parents and kids can let loose and have a great time. Through the joy of uplifting music and unstructured dance, Kelly has found that her dance parties encourage community amongst the parents and offer a different type of socializing for the kids. At her very first dance party, she saw this dream begin to become a reality, and each subsequent party has allowed that reality to grow and flourish.

Kelly’s DJing experience varies from 4 years at WPTS in the early ’90s, a monthly DJ residency called “Sussidio” at a popular neighborhood bar in Hollywood, CA, and appearances at various private parties and clubs throughout Los Angeles. Kelly is also an alum of the DJ Scratch Academy founded by Jam Master Jay of RUN-DMC.

DJ KellyA is Kelly Litzenberger (formerly Kelly Ashkettle). Another alumna of WPTS in the ’90s, she co-founded a weekly, all ages, gothic/industrial dance night called Ceremony, where she was a resident from 1997-2002. After spending a decade out of state, she moved back to Pittsburgh in 2012, husband and baby in tow. She heard about Kid City before it began, and whilst kicking herself for not having thought of it first, immediately became an ardent supporter. Her now 4-year-old son asks almost weekly if it is time to go to the kids’ dance party.

In January 2015, DJ KellyA co-founded a new gothic/industrial club night, Obsidian, which is held twice a month at the Lava Lounge. (She also revived her concert and event promotion company, Night Sky Productions.) A number of Obsidian regulars have children of their own, and KellyA is excited for the chance to meet them and play music for them — not to mention the opportunity to DJ publicly for her own son for the first time! She’s also looking forward to introducing fans of Kid City to some extra spooky dance sounds in honor of Halloween.