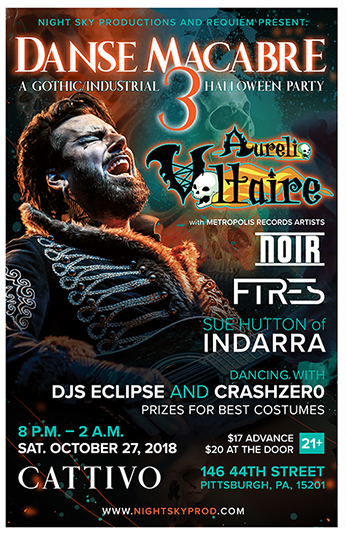 – Dancing with DJs Eclipse and CrasHZer0
– Prizes for best costumes

The Halloween juggernaut is back for round 3 — this time with some of our most exciting guests yet! Aurelio Voltaire, the master of spooky fun himself, is flying in from NYC to make your holiday complete.

Aurelio Voltaire will be supported by three different acts on Metropolis Records. This is not a tour; each artist on the bill was hand-picked to enhance your Halloween, and each is traveling separately to Pittsburgh just for this show.

NOIR (New York) is a darkwave band featuring the velvety pipes of Athan Maroulis (of such projects as Spahn Ranch and black tape for a blue girl).

FIRES (Santa Fe, NM) is Eric Sochocki’s “synthwave gone electronic” rock act. Live, FIRES is a high energy set, transforming the emotional content of the tracks to a synthrock frenzy that is irresistibly kinetic and entertaining.

Sue Hutton of Indarra (Toronto): For the first time in the U.S., Sue Hutton (ex-Rhea’s Obsession) will perform a brief solo set of material from her long-awaited new project, Indarra. Advance copies of Indarra’s debut album will be available for sale exclusively at Danse Macabre 3.

Wear your best Halloween costumes to win cash and other prizes, including $100 for first place! Show up at 8 p.m. to enjoy plenty of dancing with the DJs from Requiem, get your free candy, and enjoy all the Halloween decor in its full finery. It all goes down on the Saturday before Halloween on the lower level of Cattivo, and it’s a nonsmoking event. See you there, friends and fiends!

Aurelio Voltaire is often described as a modern day renaissance man. He is a singer/ performer, creator of comic books, animation and toys.

An internationally touring musician, he is at the forefront of the Gothic, Steampunk and Dark Cabaret genres headlining some of the biggest horror, sci-fi and comic book conventions as well as Gothic and Steampunk festivals for nearly two decades. His music can best be described as a collection of murder ballads, tongue-in-cheek exercises in the macabre, with just enough bawdy songs about Star Trek and Star Wars to keep a convention audience rolling in the aisles. Many know him for his songs “Brains!” and “Land of the Dead” from the Cartoon Network show “The Grim Adventures of Billy And Mandy.”

Voltaire’s live shows, whether solo or with his skeletal orchestra, are full of stories and games. Many describe his shows as sitting around a fire while an old friend regales you with tales, presuming that old friend drinks a liter of rum a night, dates zombie prostitutes and wrestles Krakens.

Voltaire has been recording and touring for over 20 years. He’s released 13 full-length CDs.

Most recently, Aurelio Voltaire can be seen in his informative and hilarious Youtube series, Gothic Homemaking. In this show, that can best be described as Pee Wee’s Playhouse for spooky kids, he demonstrates how to turn your boring apartment into a Gothic lair with the help of a desiccated co-host, Orville Deadenbacher and a bunch of other recurring monster characters.

Gothic Homemaking can be seen at: www.youtube.com/thelairofvoltaire

NOIR: The voice of Athan Maroulis will always be linked to the seminal Los Angeles-based trio Spahn Ranch. Through five diverse albums, highlighted by songs such as “Vortex” and “Heretic’s Fork,” Spahn Ranch served the 1990s Industrial scene with a daring mix of intelligent electronics and Darkwave moods. In the aftermath of Spahn Ranch, Athan returned to his native New York City where he took a near decade-long break from music before joining Black Tape for a Blue Girl for a pair of albums and performances from Austin to Bucharest.

Afterwards, NOIR was formed as a project that would combine both Athan’s Industrial and Gothic past while remaining very much in the electronic present. NOIR debuted with the “My Dear” single in late 2012, followed by the 2013 critically acclaimed album “Darkly Near,” which Side Line Magazine said, “NOIR probably stands for the most intimate electro project Athan Maroulis has ever been involved with. It all sounds like revealing his deepest inner thoughts transposed into electronic grace and musical poetry.”

Adding members Demetra Songs and Kai Irina Hahn, both on backing vocals and keyboards, NOIR began performing live in New York City followed by a series of road dates in the U.S. In 2016, NOIR’s “The Burning Bridge,” introduced NOIR collaborator Erik Gustafson (16volt, Adoration Destroyed) and was dedicated to the late David Bowie. NOIR’s fifth release, “Reburning,” features remixes of “The Burning Bridge” by The Rain Within, Decoded Feedback, and Panic Lift.

“Finding the sweet spot between genres is no mean feat, but FIRES consistently walks the line, inserting rock nods into electronic instrumentals like “Tell No One” and “Follower”
— idieyoudie.com

“With FIRES, Sochocki reinvents himself once again, returning to his dance roots to offer up a melodic, emotive, and above all energetic style that blends the catchiness of synthwave with the distorted atmospheres of his past industrial leanings.”
— Regen Magazine

” … Eric explained that his ‘rules’ for writing music under the FIRES name were that it had to make him dance, had to make him feel something, and had to be ‘pop.’ For the most part, he could consider this mission accomplished, then. as this is hugely enjoyable, catchy industrial-pop.”
— amodelofcontrol.com

Sue Hutton of Indarra: For the first time in the U.S., Sue Hutton (ex-Rhea’s Obsession) will perform a brief solo set of material from her long awaited new project, Indarra.

The Basque word indarra, among its many meanings, connotes both supernatural power and grace. Hutton’s keening vocals, rooted in Celtic and Bulgarian modes of sustain and soar, evoke sweeping emotions to weave a sonic tapestry, one both timeless and of today. The songs of Indarra are of the earth and the sky, the past and the future, and, as was said of Hutton’s chart-topping and critically acclaimed project Rhea’s Obsession, sound as if two worlds were dancing.

In the studio, Hutton is working in collaboration with composer/instrumentalists Chris Gartner (Hugh Marsh, Kevin Hearn and Loreena McKennitt), Kevin Laliberté (Sultans of String, Amanda Martinez, Jesse Cook), and synth wizards Heiki Sillaste (Kinder Atom) and Scott M2 (DreamSTATE). Together, Sue and the Indarra collective draw on their extensive and varied influences to conjure dreamscapes of sound linked by footpaths of groove.

Indarra is currently recording their debut album, Walk On Fire, to be released and distributed internationally on Metropolis Records in November 2018. Advance copies will be available for sale exclusively at Danse Macabre 3.